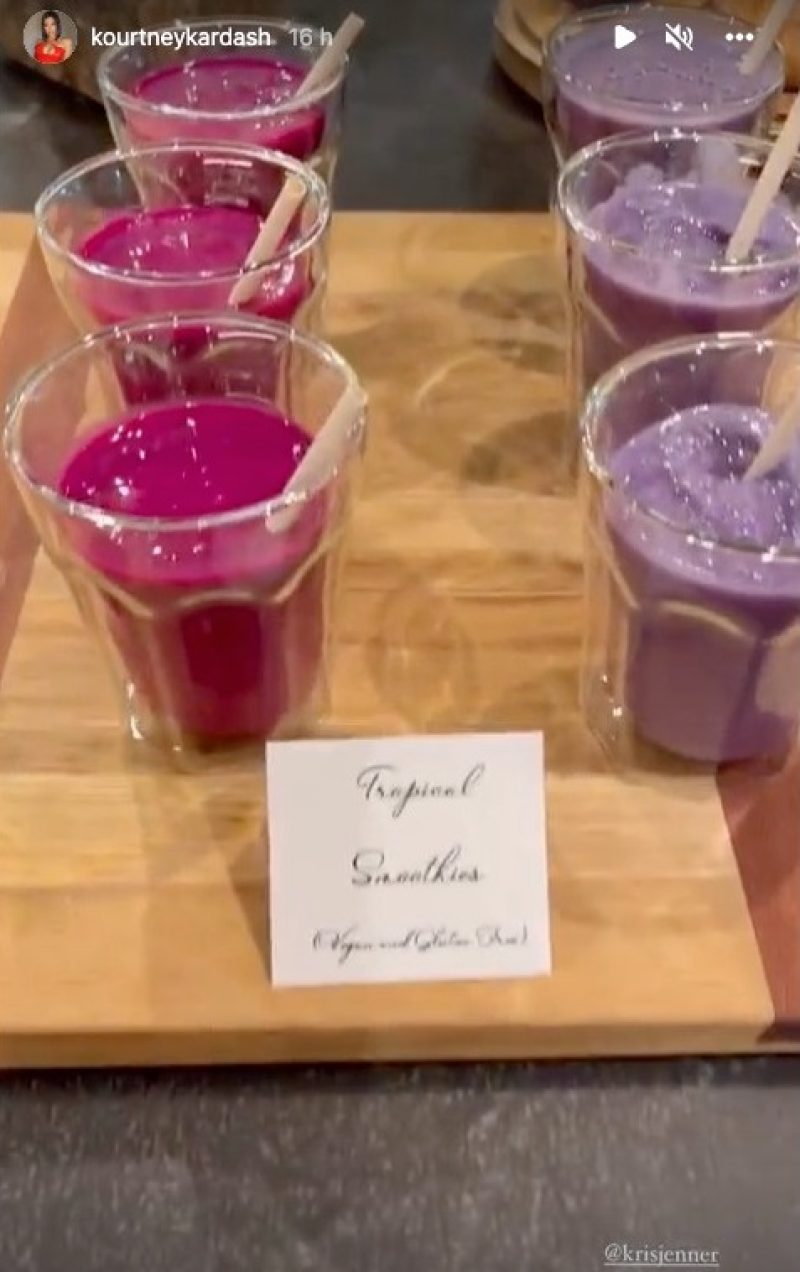 KOURTNEY Kardashian has shown off her mother Kris Jenner’s kitchen in her $17million Los Angeles mansion, which featured a smoothie bar and an Alice in Wonderland decoration.

Kourtney, 43, has given her followers a tour of Kris‘ kitchen, which had tables ready for breakfast.

In the first clip from the Instagram Stories, the table had plates of donuts, muffins, and other small cakes on top.

In the next video, the Keeping Up With the Kardashians alum pointed the camera at the bowls of chicken wings, sausages, and eggs.

As the video series continued, the following table had tropical smoothies and a large plate of fruit salad, which had strawberries, watermelon, and blue berries.

Kourtney also took a snapshot of the Alice in Wonderland figurine standing between the toaster and a small yellow plate.

She captioned the post: “From the kitchen of Kris Jenner.”

In January, the 66-year-old momager gave a peek at her fridge space for her daughter’s Poosh site.

The matriarch’s first fridge gathered vegetables and fruit from top to bottom.

The next fridge was lined up with dairy, eggs, and bread.

In the last fridge, Veuve Clicquot champagne bottles were placed next to the bottles of still and sparkling water.

Engaged to the Blink-182 drummer Travis Barker, 46, Kourtney will become the stepmother to his teenage kids: Alabama, 16, and Landon, 18.

Travis shares the two teenagers with his ex Shanna Moakler, 46.

While celebrating Mother’s Day with her family, the KUWTK star recently filmed a massive display of purple flowers.

The flowers were a gift from her rocker fiancé.

The flowers display was lined up over the banister of the stairs in the TV star’s $9M mansion in Calabasas, California.

A Frank Sinatra song played in the background of the romantic clip.

The reality star walked through her house but did not speak in the clip,

She did though tag her partner and his teen children, while adding a white heart.

She picked out Kanye West‘s song, Runaway, for her fans to listen.

Alabama’s brother, Landon, recently decided on the same song to rap and dance along to on TikTok.

During the short clip, Travis’ son pointed and rapped to the track while his two friends – including singer Nessa Barrett – stood behind him.

Fans jumped to the comments section and pointed out: “Auntie Kim is not gonna like this.”