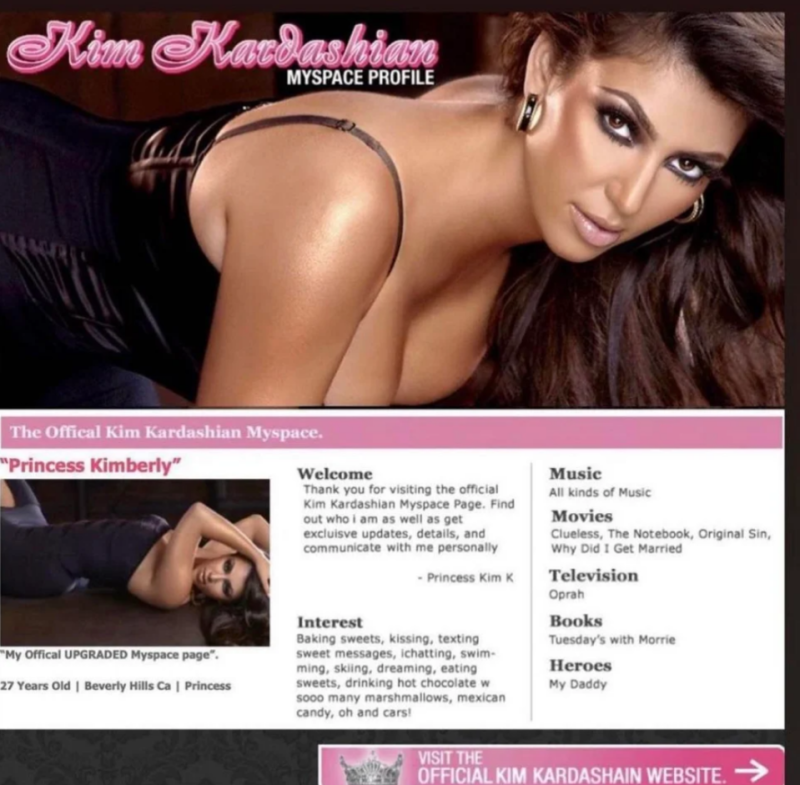 KIM Kardashian’s old MySpace page has been uncovered, sparking mockery from her fans over her “cringe” photos and bio.

When she was 27, the reality star created a profile calling herself “Princess Kimberly” and listed her interests as “kissing” and “texting sweet messages”.

InstagramShe listed her interests as ‘kissing’ and ‘sending sweet messages’[/caption]

She listed herself as “Princess Kimberly” and her bio reads: “27, Beverly Hills, princess.”

The description goes on: “Thank you for visiting the official Kim Kardashian Myspace Page.

“Find out who I am as well as get exclusive updates, details and communicate with me personally, Princess Kim K.”

Best of all is a link in the bottom right-hand corner of the page encouraging fans to visit Kim’s website – which features a major typo in her last name.

The mother-of-four’s fans flooded Reddit with their amusement over the page, which one user deemed “insane”.

Another added: “She spelled her name wrong on her website link (bottom right) lol?? LMAO.”

A third posted, “Idk why “television: Oprah” took me out. The rest of it is trying to be sexy and then just Oprah haha,” while a fourth called out the “cringe” photos.

Kim, now 41 and with four kids, has faced plenty of scrutiny on Reddit over her past behavior.

Last month, Kim and her sisters Kourtney and Khloe were slammed for their past “creepy” behavior towards their younger brother Rob.

In a “horrific” old episode of KUWTK, Kim bragged about how she and Kourtney “flicked” Rob’s “d**k” while changing his diaper when he was a baby.

In the clip from 2012, Kim relayed the story while laughing to Khloe and her then-husband Lamar Odom.

She said: “When Rob was really little, he was like a baby, Kourtney and I had to change his diaper once and we would flick his d**k to see what would happen.”

Lamar put his head in his hands in horror, while Khloe giggled at the story.

The video resurfaced online where critics slammed Kim and Kourtney as “disgusting”.