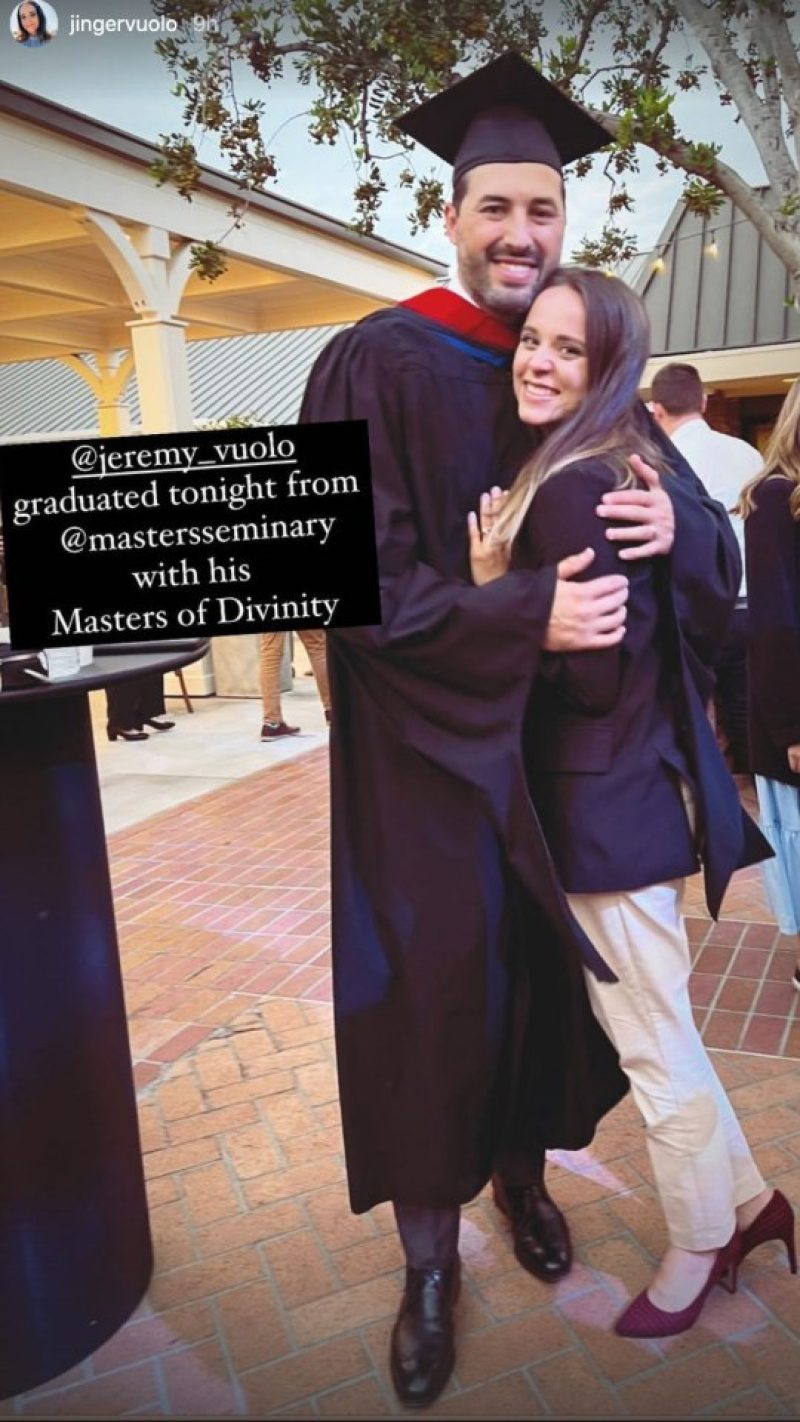 JINGER Duggar has broken her family rules as she flaunted her long legs and sexy red heels at her husband Jeremy Vuolo’s graduation party.

Jinger, 28, cuddled up to her husband in a sweet Instagram Story.

The Counting On alum placed her hands on his chest as he wrapped his arms around her black blazer.

The reality star leaned over and stretched out her long legs while wearing her heels.

Jeremy, 34, wore his cap and gown during the graduation ceremony.

She mentioned that he had graduated from The Master’s Seminary, which “trains men for pastoral ministry.”

Read more about The Duggars

In another post, she wrote: “So proud of this guy.”

Jinger and her hubby share two daughters: Felicity, three, and Evangeline, one.

This is not the first time that reality star has teased her long legs.

The ex TLC star and the former soccer star recently took a trip to Valencia, California.

While the couple hit the golf course, with Jinger teased her bare arms and legs in a sleeveless pink floral shirt and a black short skirt.

She completed the casual look with a white baseball cap.

Her partner drove around the green course in the golf cart.

During the short vid, Jinger stood with her eye on the golf ball as she prepared to take the shot and swing.

While flaunting her long legs, Jinger has broken one of the strict family rules, which her patriarch and matriarch have enforced for their Christian lifestyle.

The Duggar family observed a strict dress code that usually only permitted women to dress modestly and to wear dresses.

One of these inflexible rules included not allowing women to display their legs or dress in a revealing manner.

The family patriarch Jim Bob, 56, and matriarch Michelle, 55, have stuck to these strict rules for their Christian lifestyle, but the TV personality has continued to rebel against them.

Recently, Jinger showed off her chef skills as she shared a cooking video on social media.

During the short clip, she prepared a dinner meal for her hubby and their kids.

Jinger captioned the post: “Rigatoni is on the menu for tonight.”

She then stirred up the ground meat while the pasta was boiling in a nearby burner.

In the clip, the TV star went from stirring the meat to swirling the pasta with the same kitchen utensil, which left her fans grossed out.

One food critic wrote: “I would say don’t use the utensil you use for the meat to stir the noodles.”

Another food critic added: “And then put the raw meat spatula in the pasta water?”