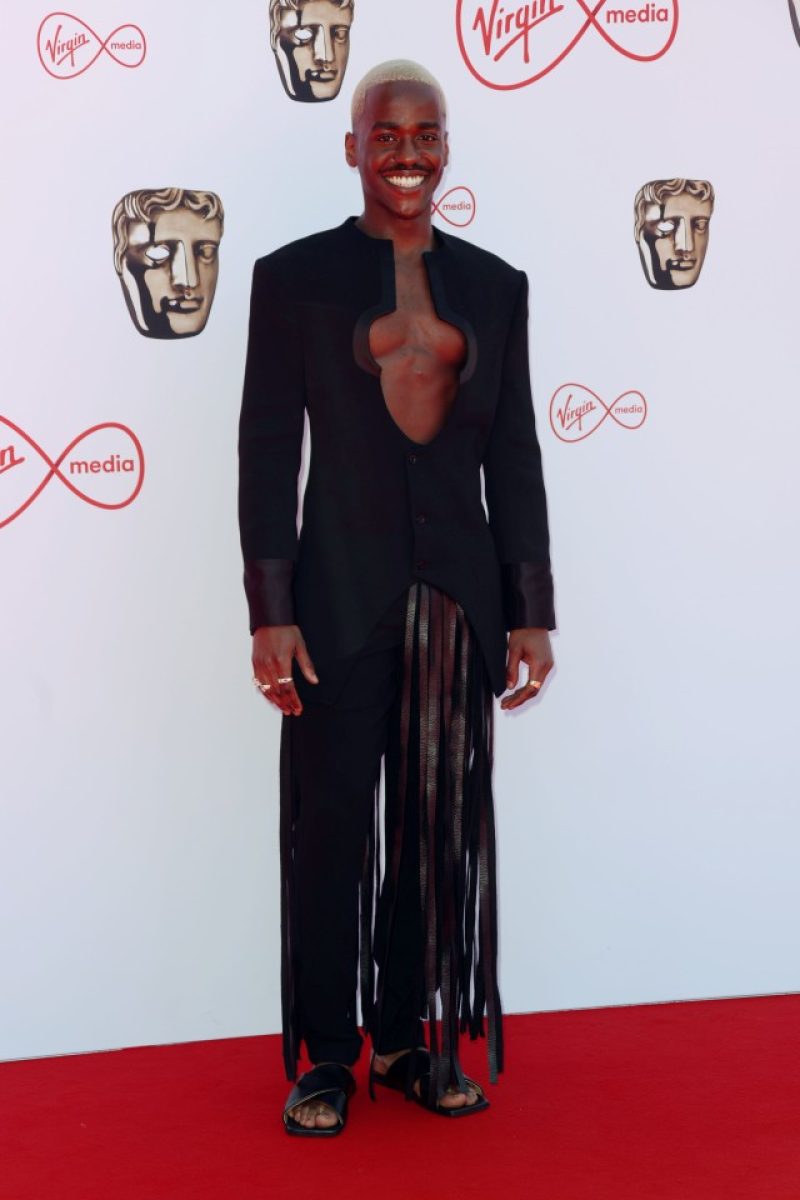 SEX Education star Ncuti Gatwa was yesterday revealed as the next Time Lord in Doctor Who — and celebrated with “copious champagne and a boogie”.

Ncuti, 29, will become the first black male actor to take charge of the Tardis when he replaces Jodie Whittaker, 39.

Ncuti, 29, will become the first black male actor to take charge of the TardisGatwa’s breakthrough role was in Sex Education

The Scottish-Rwandan actor will become the TV sci-fi series’ 14th Doctor. He arrived on the red carpet for last night’s Bafta TV awards to rapturous applause — shortly after the BBC made the announcement.

Ncuti said the Time Lord is his “dream role”. Asked how he would be celebrating, he replied: “Copious glasses of champagne! And a boogie with everyone inside. Nights like this are really nice to celebrate the industry and what we do. I’m happy to chill with the gang!”

Shocked viewers were left furious after It’s A Sin was snubbed despite leading the night’s nominations.

The hit Channel 4 drama written by Russell T Davies — who will return as Doctor Who’s showrunner next year — was up for seven gongs.

But the series about the UK’s HIV/Aids crisis of the 1980s and early 90s failed to secure an award.

Three of its stars, Callum Scott Howells, Omari Douglas and David Carlyle, went head-to-head in the Best Supporting Actor category — but lost out to Matthew Macfadyen for his role in Succession.

Years and Years singer Olly Alexander was in the running for Best Leading Actor for It’s A Sin, but the gong went to Sean Bean for Time.

Despite their endless run of awards, Ant and Dec, both 46, said they were still chuffed with their Best Entertainment gong for Saturday Night Takeaway.

Ant said: “To still be nominated 17 years later and still be winning 17 years on means an awful lot.”

Dec added: “We’re going to keep going as long as we can — as long as the knees and back hold out.”

Big Zuu, 27, was a surprise winner of two awards for his Big Eats.

Presenting an award with his Sex Education co-star Aimee Lou Wood, Ncuti could not resist a Doctor Who knock-knock joke.

He takes over from Jodie at the end of her tenure this autumn.

Before the awards bash at London’s Royal Festival Hall, he admitted keeping his appointment as the Doctor a secret since February. He said: “It’s been emotional, I woke up crying. But I’m glad it’s finally out and I don’t have to keep it a secret anymore because I’m terrible.”

In the official announcement, Ncuti, who was born in war-torn Rwanda and fled as a toddler with his family to Scotland, said: “I’m feeling a mix of deeply honoured, beyond excited and of course a little bit scared.”

Ncuti was homeless when he secured his big break as Eric Effiong in the Netflix comedy Sex Education. It earned him a Bafta Scotland Award for Best Actor.

But he missed on the Best Male Performance in a Comedy Programme gong last night. That category was won by Jamie Demetriou for Stath Lets Flats.

Doctor Who boss Russell, 59, said: “Ncuti dazzled us, seized hold of the Doctor and owned those Tardis keys in seconds.”

“Just seeing the diversity on screen has been great.”

The winners at the BaftasActress Rose Ayling-Ellis, 27, who is deaf, won the Memorable Moment prize for her silent dance on Strictly Come DancingTV presenter Rochelle Humes wowed in a lace gownKilling Eve actress Jodie Comer was in attendanceAs was Eleanor TomlinsonMichelle Keegan and Mark Wright posed on the red carpetAs did The Pussycat Dolls’ Ashley RobertsAnt and Dec, both 46, said they were still chuffed with their Best Entertainment gong for Saturday Night Takeaway