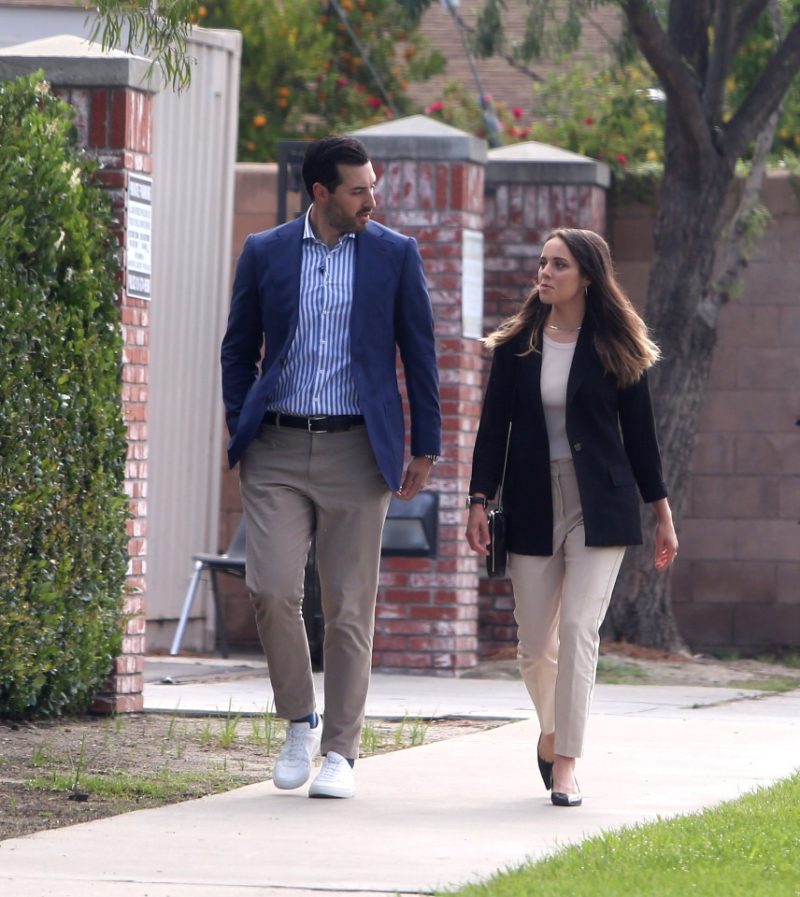 The former TLC star snubbed mom Michelle Duggar, whom she and husband Jeremy Vuolo have distanced themselves from as of late.

On Sunday, Jinger, 28, and Jeremy, 34, were spotted out celebrating Mother’s Day together.

The mom of two ditched Duggar modesty rules, stepping out in Los Angeles in a pair of tight tan pants and high heels.

She topped the look off with a form fitting shirt and blazer.

Jinger snubbed mom Michelle Duggar on the special day, focusing on her own family.

Husband Jeremy was spotted by her side, dressed to the nines.

He paired the dressed up look with a pair of white sneakers.

The couple has been keeping their distance from Michelle and husband Jim Bob Duggar in the wake of a scandal involving Jinger’s older brother Josh Duggar.

Fans have been complimentary of Jinger as she finds her fashion sense.

Earlier this month, the ex TLC star and her former soccer star husband took a trip to Valencia, California.

During the trip, the couple hit the golf course, with Jinger showing off her arms and legs in a sleeveless pink floral shirt and a black short skirt.

She topped off the look with a white baseball hat.

Jeremy drove the golf cart during the outing.

Jinger shared a video from the outing, standing with her eye on the ball as she got ready to take a shot.

Her outfit during the outing was head-turning to some fans, as it was a far cry from the kinds of outfits allowed in dad Jim Bob Duggar’s house.

The Duggar family has always followed a rigid dress code that only permits women to dress modestly and to wear dresses.

One of these rules includes not allowing women to show their legs or dress in a revealing manner.

The family patriarch Jim Bob, 56, and matriarch Michelle, 55, have stuck to these rules for their Christian lifestyle, but Jinger continues to rebel and find her own path.

Although fans love seeing Jinger develop her own fashion sense, she does occasionally face criticism.

The 19 Kids and Counting alum has been based for her kitchen skills as of late.

On Friday, Jinger shared a video of herself cooking dinner for her family.

She captioned the post: “Rigatoni is on the menu for tonight.”

In the clip, she was seen stirring ground meat while pasta boiled on a nearby burner.

The Counting On alum went from stirring the meat to swirling the pasta in the pot, which left fans concerned – and grossed out.

One commenter wrote: “I would say don’t use the utensil you use for the meat to stir the noodles.”

Another concerned social media user wrote: “And then put the raw meat spatula in the pasta water?”

One critic said: “Where’s the sauce?!”